(Un) fortunately, I have one more week holiday entitlement per year than Suzanne, so instead of moping away at home, painting the stairs or mowing the lawn, I decided to look for a long weekend somewhere warm in the middle of May.  Greece is a three and a half to four hour plane journey time so I wasn’t really considering it for a long weekend, but somehow budget flights to Mytilini kept cropping up in my searches so I decided that something was nudging me Greece-wards. I checked out the cost of Airbnb accommodation for a week & found an apartment in the centre of Mytilini for a really affordable price. Suddenly a week in Greece was more than doable, it was calling me like a siren’s song (see what I did there?).

I flew from Birmingham with Thomas Cook Airlines. I’ve never flown with them before so I was unfamiliar with their setup when I booked.  A word of warning if you haven’t either, the weight allowance for a cabin bag is a tiny 6kg. I normally pack light but I had to put a bit more thought than normal into fitting all my stuff in for the week. Thomas Cook doesn’t seem to have a mobile app either. For the outward journey, I checked in at home, downloaded the boarding pass and saved it as a pdf on my phone. I did the same thing for the flight back. Snacks were available on the flight but meals needed to be pre-booked at or before check-in. The seats were probably the most uncomfortable I’ve ever sat in. I resorted to sitting on my jacket and eventually my hand to try and wring a tiny amount of ‘give’ out of the seat.

I arrived at Mytilini airport at 8pm and easily found a bus to Mytelini harbour (2 Euros ). The journey is a little confusing at first, the bus turned up many very narrow roads, then continued up steep hills for a km or so before doing a nine-point turn and going back down again. All without anyone getting on or off. At the fourth narrow lane, there were around 50 teenagers waiting to get on ready to go into town. Apparently, the airport ‘shuttle’ is a local bus too.

When the bus arrived at the harbour, the place was buzzing.  Mitilini harbour is crammed with restaurants and bars and on that Saturday evening every single one was overflowing. Mitilini is obviously, the place to be at the weekend for Greeks young and old. The following day the harbour was still teeming with life but oddly the teenagers and the hipsters were replaced by a slightly older generation. Perhaps it’s a case of the older generation having more staying power, or maybe they just learned what too much ouzo can do?

I was extremely lucky, my AirBnB apartment was fantastically placed just two minutes walk from the harbour. It was very basic but comfortable considering that I was mainly using it just to sleep and shower. I think I would have found it a little too basic if I’d needed to spend much time there, but Greece being Greece, daily life is lived on the street. There are tavernas, coffee shops and cafes enough to eat at a different place for breakfast, lunch and dinner every day and still sit and enjoy watching the world go by with a leisurely Fix beer or two every evening, and heading home for a nap before rejoining the throng for a second stroll around the harbour. When in Greece and all that…

Mytilini is mainly a working city rather than a tourist resort and the choice, quantity, quality and cost of food and drink reflects this. The variety seems endless; cafes, bars and restaurants squeezed cheek by jowl along the harbour and adjoining streets, and all at lower prices than you’d expect to find in one of the tourist hot-spots. From traditional to pizza parlour; fish, meat and veggie, all options are available. And yes, as you would expect, souvlaki and gyros are easy to find too. As always in Greece,  people tend to eat around 9 or 10 pm, so if you see a restaurant empty at 7 it doesn’t necessarily mean it’s a poor choice, check it out at 9:30 and reference it for the next evening. 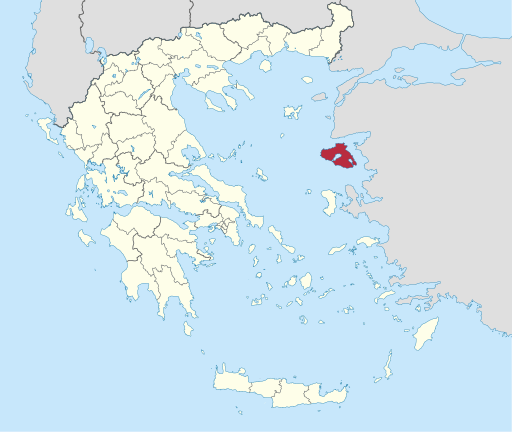 By Pitichinaccio [GFDL or CC BY-SA 3.0], from Wikimedia Commons

Although Lesvos is a large island that deserves exploration, I’d already decided that exploring further afield could wait until another time. On this solo visit, I’d concentrate on exploring Mytiline properly on foot and see what it had to offer in much more depth than I’d have time for if I was travelling from place to place – a bit of ‘slow-exploration’ if you like!

The Port
I spent my first day walking around the port, taking in the sights and getting my bearings.  Mytilini is the capital and main port of Lesvos. Like Rome and Bath, Mytilini is built on seven hills. Don’t expect your usual, laid back, small Greek town, Mytilini is a fully fledged city, but it’s a smallish, walkable city. It bustles with loads of restaurants, bars and shops but all on a manageable scale, and as always in Greece it’s full of friendly people with interesting stories to tell – and manic traffic! Mytilini stretches in a semicircle around its seven hills with  many small alleys to investigate. Fans of architecture will enjoy the many traditional buildings, cobbled streets and old mansions. There are also lots of museums, galleries, churches and ancient monuments, a lot of which I spent the following week investigating.

Beaches
The City Beach (AKA Tsamakia Beach) is the only pay beach on Lesvos. Entry is 2 Euros and includes loungers, sunshade, cafe-bar, showers, changing rooms, toilets, children’s recreational facilities and volleyball. Fykiotripa beach is another beach within a short walking distance past the City Beach, Fykiotripa is a tiny but lovely pebbled beach in a small cove.

** On 15th June, I learned that in what appears to be a cynical attempt to keep refugees off the beach, a notice has appeared at the entrance to Tsamakia Beach requiring a passport from anyone who is not from a Shengen country. Personally, I wouldn’t feel welcome anywhere that tried to exclude people based on where they originate. I’d use another beach.

Castle
Mytilini Castle dates back to the time of  Justinian I (527–565) and may have been built on the site of an older castle. At the time of building, it was one of the largest castles in the Mediterranean.

The walk to the castle is quite steep and takes around 30 minutes starting from the port.  After paying the entrance fee (2 Euros) you can walk around the grounds; the views are spectacular. When I was there, there were around 30 feral dogs on the approach to the grounds. They seemed quite friendly but keep this in mind if you’re not comfortable around dogs.  I believe that during the season, the castle is used for concerts, festivals and other events.

Within walking distance of the harbour, this is well worth a visit as it  has a very rich and well presented collection of religious art. You can take as many photos as you like in the church but not the museum.

Mytilini is said to be the home of ouzo the Greek national drink, so a visit to a distillery is a good idea, the AVA distillery is about 5km from Mytilini port, so can be reached on foot, they take you on a tour of the distillery to show you the process and also there is a museum which gives you an idea of the progress in production methods, you then get a tasting of the different products brewed at this distillery.

The Petrified Forest covers a large area including the villages of Sigri, Skala Eresou, Eressos, Andissa and Gavathas and includes hundreds of standing and lying petrified tree trunks. Lesvos’ Petrified Forest is bigger than the more famous one in Arizona and was formed 20 million years ago when a volcano exploded in this part of northern Lesvos,  covering the entire area with ash and lava. Some of the trunks are 20 meters in length and 3 meters in diameter and you can even see the root systems.

To get there take the road to Sigri and follow the signs.

Agalma Eleftherias
This bronze statue was created by a Greek sculptor based on a design by a local painter, was cast in Germany in 1922 and was erected and dedicated in Mytilini in 1930. It is just 5 minutes walk from the harbour to see it close up, although not a must see it is convenient enough to visit.

Theophilos Museum
I walked along the coast to the Theophilos Museum, the museum is advertised as open until 14:30. I arrived around noon and it was closed! After enquiring, it became clear that the opening times are considered to be flexible, depending on if they were busy or not. I was directed to the Municipal Art Gallery as an alternative and was not disappointed.

The walk from the harbour to the Theophilos Museum is about 4 km along the coast, it’s a lovely walk,  but to get to the end and find that all you get is a walk back in 35 degree heat kind of slows your step a little. Keep this in mind and if you can find a way of calling ahead it will save you from suffering the same fate as I did.

Cruise Ships
Between late Spring through early Autumn, large cruise ships call at Mytilini anchoring outside the south harbour and launching tenders to ferry passengers to the inner harbour pier. The port gets extremely busy when the cruise ships are in port.

About Out of the Office

Out of the Office is Suzanne and Steve. Although we both have full-time jobs, we spend our spare time plotting and planning to get out of the office, pack up our bags and head on out into the sunset (or sunrise). It doesn't matter if it's for the day or for a few weeks; 20 miles down the road or over to another continent; we don't really care, we just like to pack up and go, with a great soundtrack and a lot of laughter on the way.

And yes we know it's an old photo but a). we like it and b). It's about the only one we have due to Suzanne's terminal camera shyness. We're working on it OK?

Some of the links used throughout this blog are affiliate links. At no additional cost to you I will earn a commission if you decide to make a purchase after clicking through the link.  I have experienced all of these companies, and I recommend them because they are helpful and useful, not because of the small commission I make if you decide to buy something through my links. Please do not spend any money on these products unless you feel you need them or that they will help you achieve your goals.